Baby-led weaning approach is what mothers did for hundreds of years before the introduction of specially prepared baby foods. And in the last 10-15 years the baby-led weaning method started to become more and more accepted. Especially after the first publication of Baby-Led Weaning book, by Gill Rapley.

She states that BLW is a natural process and is basically a continuation of breastfeeding with self-regulation of breastmilk intake corresponding to their internal hunger and satiety cues (babies feed for as long and as often as they want) as opposed to passive feeding with the bottle.

As an alternative method for introducing first foods to infants, baby-led weaning gives babies the ability to control their self-feeding while exploring the taste, texture and amount of first foods at their own pace.

Parents prefer choosing baby-led weaning because they perceive that it provides healthier eating habits (greater acceptance of foods), less food fussiness, reduces cost and it’s more convenient because they don’t have to worry about following a plan. Baby-led weaning also lets baby participate in the family meal and studies show that having family meals at the table sets up healthy eating patterns later.

How To Start Baby Led Weaning

“Weaning” generally means – introduction of solid food – to both breastfed and formula-fed babies. It could be a pretty long process as it begins with the first solid food (usually recommended at 6 months of age) and ends with the last feed of either breast milk or formula.

BLW proponents suggest that ideally the child should be breastfeed exclusively for the first 6 months. And then at 6 months, when baby shows developmental readiness for solid foods, these could be given, in addition to breast milk, until he is comfortable enough to cease milk consumption.

Start baby-led weaning by offering new foods (pieces of whole food) one at a time, to make sure child isn’t allergic. The food should be soft or well-cooked, cut into sticks or strips, easy to grab but not bite-size pieces. The first time won’t be perfect and probably really messy, but keep going, the self feeding skills will improve.

Physiologically, the experience of introducing solids to a 4-month-old is very different to a 6-month-old because babies are not yet able to sit up unsupported, bring food to their mouth, chew and swallow food. Therefore many parents choose to start BLW at 6 months of age, or spoon-feed purees from 4 months (if it’s necessary) to 6 months and then proceed to BLW exclusively after.

A key difference between spoon-feeding and baby-led weaning approaches is in the textures of foods offered: smooth runny puree vs chunks of food, large enough so the baby can pick them up. Another difference of BLW vs spoon-feeding purees is that the infant eats at his own pace, chooses and controls his total food intake while learning the “mechanics”.

But you definitely can do both. Offer finger foods alongside puréed or mashed food! You can start with a combo approach and then move to more BLW. Just see what the baby wants/is ready for.

A study of infants aged 6–8 months compared the nutrient and ‘family meal’ intakes found that infants following baby-led weaning had similar energy intakes to those following spoon feeding and were eating family meals more regularly, but appeared to have slightly lower intakes of iron, zinc and vitamin B12.

For whatever reason you’re worried your baby is not receiving enough nutrients or not gaining weight due to BLW, then you can add some purees here and there.

Gagging is very common among all infants and it can persist throughout infancy as they learn to eat solids . The gag reflex generally subsides with age and children can eat finger foods with little or no gagging at about 8–9 months.

It has been argued that this is one of the advantages of BLW in that the BLW infant learns to eat finger foods just in time when the gag reflex is still working by keeping large pieces of food to the front of the mouth, only allowing well chewed food to reach the back of the mouth for swallowing.

With regard to the occurrence of choking episodes, experts say that no difference was detected between the BLW feeding and the traditional way. Usually the mothers that observe their child choking said that he dealt with the problem on their own and got rid of the food through coughing. You just need to observe, and make sure he spits it out or chews it.

Additionally, every parent/caregiver, regardless of how you feed your baby, should be trained in infant first aid/CPR (which would include care for choking).

To sum it up: according to a 2018 recent study, BLW can be an alternative complementary feeding type without increasing the risk of iron deficiency, choking or growth impairment.

Baby-Led Weaning also differs from conventional methods for introducing complementary food in that a wider range of foods are suggested as first foods.

A general rule is it should be cooked until tender but still firm enough to keep its integrity.

By around 10-12 months of age your baby should be eating a variety of textures and consistencies. They will basically eat what you’re eating plus additional vegetables and fruits as snacks. Soups, salads, pasta, sauces, stews with or without meat, casseroles they are all welcomed.

Disclaimer: The information, including but not limited to, text, graphics, images and other material contained on this website are for informational purposes only and not intended for medical advice. Please refer to my full disclaimer for more info.

©ThrivingNest. Content and photographs are copyright protected and need prior permission to use. Copying and/or pasting full recipes to other websites and any social media is strictly prohibited. Sharing and using the link of this recipe is both encouraged and appreciated! 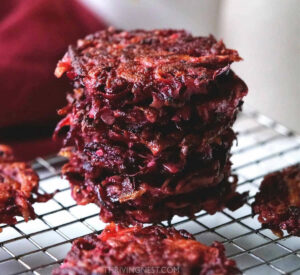 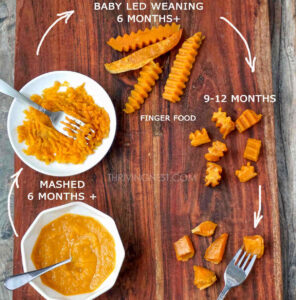 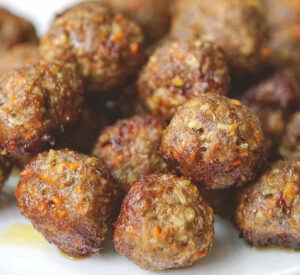 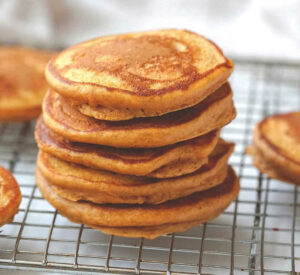 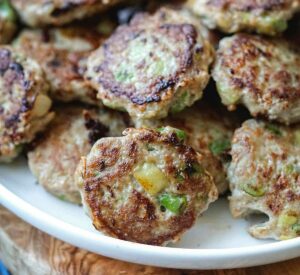 Get the new posts straight to your inbox!